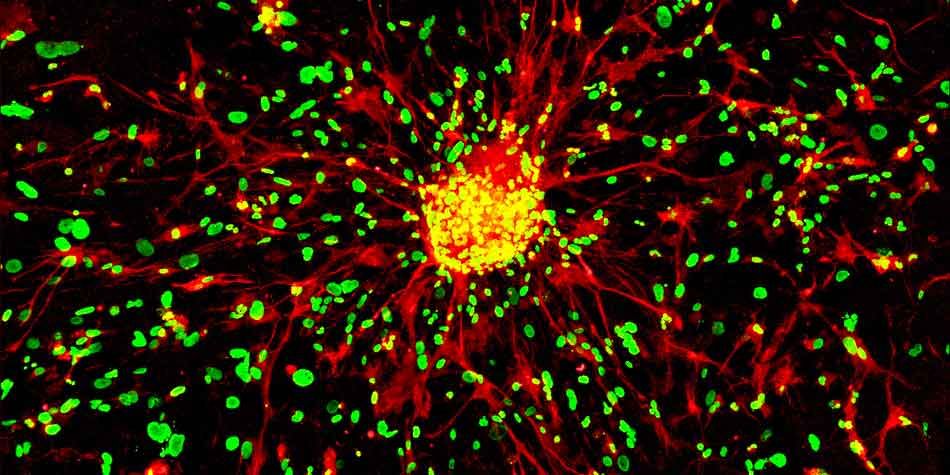 Our GlioME team develops projects to better understand human glioma biology, to identify new targets, and to evaluate promising anticancer therapies using appropriate cellular and pre-clinical models. Gliomas are the most common intracranial tumors in humans. The most malignant is glioblastoma (GB, grade IV), with an incidence of 3–5 out of 100,000 persons in Western countries. GBs are lethal tumors and even optimal surgical resection, followed by chemotherapy and irradiation, results in a median survival of about 12–15 months. We trust that a comprehensive understanding of glioma cell-of origin as well as the intricate micro-environmental landscape of these tumors will result in the development of novel therapeutic strategies. Therefore, our team focuses on 1) setting up performing preclinical glioma models and identify new targets and 2) identifying glioma biomarkers and participating to clinical trials. We are also involved in basic science consortia dedicated to nanoparticle design and development for brain tumor treatment.

To this end, over the last years we developed several fundamental lines of research on special aspects of human glioma: 1) we found a new way to identify and purify glioblastoma cancer stem cells by using a ganglioside (A2B5); 2) we studied the role of inhibitors of apoptosis proteins (IAP) and EB1 microtubule protein in glioblastoma proliferation and migration; 3) we discovered a blood marker (MMP2/MMP9) for predicting the response to antiangiogenic treatment (Bevacizumab). All our work is based on cutting-edge methods and technologies (cancer stem cell cultures, orthotopic xenografts, syngeneic murine model, two-photon microscopy…).

Our team is mainly composed of physicians (neurooncologists and pathologists) and pharmacologists, allowing the development of relevant translational research, facilitated by an important cohort of patients and a large collection of biological resources (AP-HM) and the involvement of Profs. D. Figarella-Branger and O. Chinot in local, national and international clinical and pathological networks. Moreover, on the Timone site, our team benefits from the geographical proximity of physicians grouped in the Timone AP-HM hospital, as well as facilities including the AP-HM CRB-TBM (Centre de Ressources Biologiques –Tumorothèque Banque de Muscles) and technology platforms (animal facilities, CERIMED imaging platforms...).

1. Deciphering the role of A2B5 in gliomas

We have previously shown that all glioma subtypes expressed the A2B5 epitope as recognized by the A2B5 monoclonal antibody (Colin et al., 2006) that specifically identifies trisialogangliosides at the surface of the cells. We have also shown that A2B5+ cells isolated from glioblastoma (GB) IDH-wild-type had cancer stem like cells (CSLC) properties (Tchoghandjian et al., 2010; Tchoghandjian and Baeza-Kallee et al., 2012). However, a causal link between A2B5 reactivity and GB growth has not been proven and the precise role of A2B5 expressing cells in gliomagenesis remains to be studied. Therefore, we pursue our studies to determine whether these gangliosides are necessary and sufficient to maintain stemness and promote GB growth. In collaboration with Team 6 (Dr E. Nivet), we also plan to implement human induced pluripotent stem cells (hiPSCs)-based glioma models that will allow the study of A2B5 expressing neural cells as glioma tumor initiating cells (GTICs). Finally, we aim to set-up two syngeneic models of murine A2B5+ gliomas mimicking low grade and high grade glioma, respectively.

2. Deciphering the role of the Inhibitors of APoptosis (IAPs) and Microtubule Dynamics in the regulation of GB progression, microenvironment and stemness

Our recent results (Tchoghandjian et al., 2016; Bergès et al. 2016), led us to develop a common strategy to investigate the role of IAP and MT dynamics on the microenvironment, by taking advantage of a multicolor reporter transgenic mouse model with a cranial window that allows reccurent imaging by multispectral in vivo two-photon microscopy. This work is conducted in collaboration with the ImaPath team in the INT (Dr F. Debarbieux), and the CERIMED. By using GB orthotopic syngenic models (GL261 cell line) or mice orthotopically grafted with GBM stem cells, we evaluate the effect of candidate drugs for which we obtained significant results in cellulo (Smac mimetics GDC-0152, MT Agents) on tumor cell microtubule dynamics, the inflammatory-immune microenvironment, angiogenesis and tumor growth /invasion.

3. Deciphering the biological role of MMP2 and MMP9 in GB development and resistance to anti-angiogenic therapies

Based on two cohorts of patients with recurrent GB treated with bevacizumab and one cohort treated with a cytotoxic agent, we showed that low MMP9 or high MMP2 baseline plasma levels were associated with a high response rate and a prolonged survival as compared to patients with high MMP9 or low MMP2 plasma levels (Tabouret et al., 2014). We also showed that MMP9 plasma level decreased during bevacizumab treatment and tended to increase at progression while MMP2 increased during treatment and decreased at progression (Tabouret et al., 2015). These results strongly support a role for MMP9 (and MMP2) in the primary or acquired resistance to bevacizumab, so that inhibition of MMP9 is an attractive opportunity to overcome resistance to bevacizumab. Nevertheless, the biological rational of MMP2 and MMP9 predictive value for anti-angiogenic treatment remains unclear. Therefore, our ongoing studies aim at validating our predictive results in a prospective trial, to understand the biological implication of MMP2 and MMP9 in GB and to evaluate the activity of an antibody against MMP9, GS5745, developed by Gilead®, for its ability to reverse resistance to anti-angiogenic agents.

4. Improving nanoparticle (NPs) delivery in the brain for theranostic applications

Nanomedicines are promising tools to overcome glioblastoma challenges and achieve effective drug delivery at the tumor site for therapeutic or theranostic purposes. Our aim is to investigate the safety, anticancer efficacy, pharmacokinetic and biodistribution profile of different nanoparticles (metallic nanoparticles, carbon-based nanoparticles, nanodroplets) using adapted in vitro and in vivo models. Anticancer activity of nanoparticles can be obtained through intrinsic properties (i.e. nanoparticles with photothermal conversion properties) and/or functionalization with anticancer drugs. In collaboration with our partners (CEA Saclay, Institut Fresnel, LMA, IBMM, LIB), we aim at enhancing brain tumor drug delivery upon systemic exposure of nanomedicine using ultrasound-mediated blood-brain barrier opening, and intend to improve anticancer efficacy with advanced techniques such as laser-induced hyperthermia or ultrasound-controlled drug delivery. Moreover, we are interested in the development and characterization of drug delivery systems able to target the tumor resection microenvironment and slowly release active compounds to avoid the onset of glioblastoma recurrences.