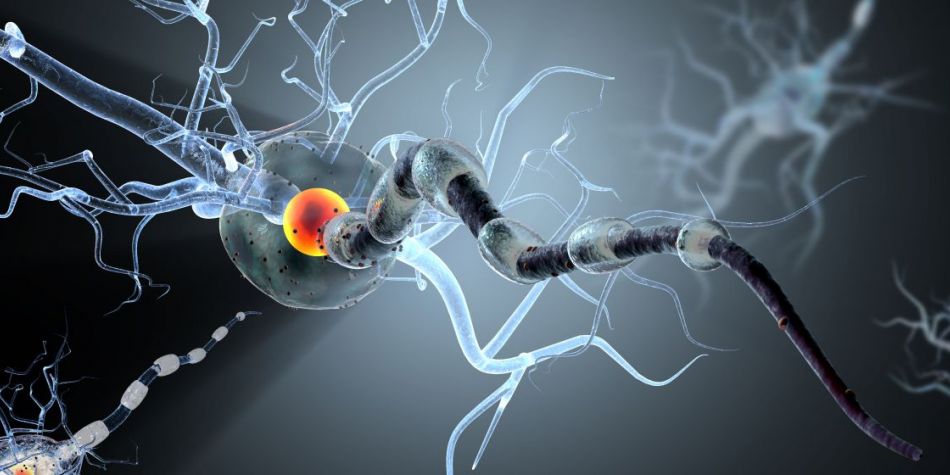 The « Neuroinflammation and Multiple sclerosis » team is coordinated by Sophie Desplat-Jégo, MCU-PH, MD, PhD , specialized in medical immunology. SDJ has developed a research topic on the role of the cytokine TWEAK, member of the TNF family during neuroinflammation especially in the pathological context of multiple sclerosis (MS) and her group has generated reference articles that describe the deleterious effects of TWEAK in the central nervous system (CNS) during MS and its animal model, EAE. In the last years, the TWEAK project has focused on the study of biological effects of TWEAK on the properties of the BBB. In the coming years, the team will pursue studies on neuroinflammation and involvement of TWEAK in MS. By combining fundamental, pre-clinical and clinical research, our objective is to discover what the exciting cytokine TWEAK hide at the crossroads between neuroinflammation and autoimmunity in multiple sclerosis. We are six permanent members in the team: Delphine STEPHAN (Research Engineer), Sylvie CARMONA (PhD), Daniel BERTIN (PharmD, MSc), Jean Philippe DALES (MD, phD), Christophe PICARD (MD, PhD) and Sophie DESPLAT-JEGO (MD, PhD). We enjoy to teach and supervise students from Bachelor to PhD.

1. To further evaluate the relevance of targeting TWEAK/Fn14 pathway in CNS for treating MS

Our previous results showed that i) inhibiting TWEAK activity is efficient for clinically reducing the severity of the disease and the number of immune cell infiltrates observed in histological studies and ii) the therapeutical effects of the anti-TWEAK antibody occurred during phases of leucocyte trafficking across the BBB. In our project we have the long-term goal to describe TWEAK/Fn14 interactions and anti-TWEAK antibody effects at the BBB level and in the CNS tissue in vivo during EAE progression in order to propose the inhibition of TWEAK as a valuable new therapeutical lead in MS.

Recently a phase I, first-in-human, double-blind study using anti-TWEAK antibody in rheumatoid arthritis, another chronic inflammatory disease, showed a favorable safety and tolerability profile of the TWEAK/Fn14 blocking. However TWEAK belongs to TNF ligand superfamily and blockade of human TNF has been shown in some patients to increase the risk of CNS demyelinating disease. In order to modulate this concern and to reinforce the promising biological properties of TWEAK/Fn14 inhibition in MS treatment we will characterise the specificity of TWEAK/Fn14 pathway and signalling processes induced on the BBB, in comparison with TNF. By using the human microvascular cerebral line hCMEC/D3, we will compare the transcriptome and the cytosolic and membrane proteomes of these cells stimulated or not with TWEAK and TNF-α and decipher the molecular pathways stimulated by TWEAK or TNF. We anticipate that our data will help proposing treatment modalities (window of delivery for example) that might considerably influence the outcome of TWEAK targeting therapeutic concepts.

We have described for the first time TWEAK-binding antibodies in humans, during chronic inflammatory diseases including MS. In a cohort of MS and other inflammatory neurological diseases patients, we will prospectively further characterize TWEAK-binding antibodies: correlation with clinical and CNS MRI data (age, sex, serum inflammation parameters, titers of soluble TWEAK, …).We will also study whether these antibodies are pathogenic during MS or are only an epiphenomenom during the disease. We have recently purified human TWEAK-binding IgG from some human serum and we have shown their inhibiting effect on secretion by endothelial cells of CCL-2, a pro-inflammatory chemokine. We want now to test further their anti-inflammatory properties on in vitro model of BBB and on neuron or astrocyte cultures.  Moreover, we will study in mice during EAE the deposit of the TWEAK-binding antibodies in CNS tissue and their potential colocalisation with myeloid cells around the myelin. In addition, a prospective longitudinal study involving MS patients is in progress with the team of Jean PELLETIER and the team of Jean-Philippe RANJEVA. This study evaluate serum soluble TWEAK levels and CNS MRI neuroinflammation parameters. Preliminary results showed that TWEAK serum levels are elevated in MS patients in relation to the disease activity. This simple and reproducible serum test could be used as a marker of ongoing inflammation, contributing in the follow-up and the care of MS patients. Thus, TWEAK is a promising serum marker of the best windows to perform brain MRI optimizing the disease control in patients.

Although the etiology of MS is unknown, epidemiological data support a genetic predisposition to the disease linked to a number of genetic loci (HLA DR15-DQB1*06:02 and other HLA molecules like HLA-G) Tumor necrosis factor α (TNF-α) gene is located in the major histocompatibility complex (MHC) region including HLA genes and it has been repeatedly suggested that genetic predisposition to MS might be influenced by TNF gene polymorphism. The genetic analysis of MS in Europeans (GAMES) consortium revealed a significant association between TNF-α polymorphism and the occurrence of this disease. Belonging to the TNF ligand family TWEAK could be also subject to polymorphism. Moreover, our recent description of TWEAK-binding antibodies (auto or allo-antibodies?) during MS suggests a possible allo-immunization appeared during the pregnancy against mutated epitopes of TWEAK. We propose to test this hypothesis in our project by identification of polymorphism in silico and by new generation sequencing with the expertise of Christophe Picard. The impact of these mutations on the transcriptional expression of TWEAK and the consequences on the TWEAK protein functions will be studied. Finally, we will study if transfection of ad hoc cells with polymorphic TWEAK gene constructions will modulate auto or allo- reactivity against TWEAK molecule.